3.     The third ship to bear the name  Indefatigable was laid down in Woolwich early in 1833 and was to have been built from the timbers of the Boscawen as a 50 – gun ship, sister to the Vernon. In March 1834 the Admiralty ordered the building to cease, and directed that the  Boscawen was to be converted into a 70 – gun ship.

4.     The Fourth  Indefatigable was a 50 – gun frigate, built at the Royal Dockyard at Devonport and launched  in 1848. She was of 2626 tons, 500 crew, length 180’, beam 51’, draught 16’. After spending 1849 cruising in the Channel, she was sent to the West Indies. She was in the Mediterranean from 1851-53 and then became the Flagship of Sir W.J. Hope Johnstone on the South American Station. Recalled in 1857 she spent several years laid up at Devonport before being given to the Liverpool Merchants Training Ship Committee.   In 1865, as TS Indefatigable, she was moored off New Ferry Pier on the Mersey and stayed there until 1914 when she was broken up.. 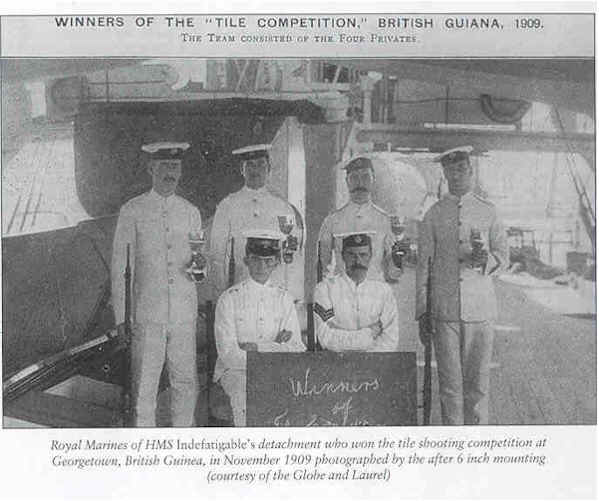 5.     The Fifth  Indefatigable was an 8 – gun twin screw cruiser, launched at Glasgow in 1891. Of 3600 tons, 9000 horse - power, 20 knots speed with a length of 300’ beam of 44’ and draught of 18’. This protected cruiser of mixed 6 inch and 4.7-inch gun armament was part of the 70 – vessel Ł21.5 million naval rearmament programme authorized by the 1889 Naval Defence Act.  Later, although listed among the ships of doubtful value, she escaped Admiral Fisher’s scrapping programme and recommissioned as Melpomene, the Muse of Tragedy, in January 1910, after her name had been taken for a battlecruiser, another element of the Fisher reforms that transformed the Royal Navy between 1904 and 1910.   In 1906 she was sent to the West Indies with a Royal Marine detachment four times its usual size, and comprising 48% of her crew, as guardship. Sold in October 1913, after her role in the West Indies was taken over by  HMS Hermoine, she was one of four Apollo Class cruisers to be associated with the Royal Marines, the others being  Intrepid,  Iphigenia and Thetis which achieved fame as blockships at Zeebrugge on 23rd April 1918.

7. The Seventh ship to bear the name Indefatigable was a Fleet aircraft carrier, built by John Brown on the Clyde and launched on 8th December 1942 and commissioned on 8th December 1943. After service in WW2 and post war with FOTS and the Home Fleet she was finally towed into the River Clyde for scrapping in 1956.