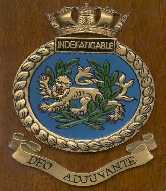 The ship's Crest of `Indefatigable' was adopted from the Coat of Arms of Admiral Sir Edward Pellew, who commanded the first Indefatigable during the Napoleonic wars.  He earned his title after the destruction of the French Ship-of-the Line "Droits de L'Homme" in 1797.

His Motto was also adopted -  It is two words -

The official description of the badge is :-

" Through a wreath Laurel proper, a Lion penant gardant gold "

There is an interesting footnote