Norway to the North Pacific

Acknowledgements -
The pictures (originally in water colour) are reproduced from the 1770 Squadron Booklet with the kind permission of the artist,  S/Lt (A) Val Bennett R.N.V.R. who served with distinction  with  the Squadron during WW2.

This is the story of a Naval Air Squadron, formed during the Second World War of 1939-45 to do battle for Britain. As a Squadron we lived for only two years, but during that period we saw service in five Oceans extending from the Arctic to the Pacific.  We lived and worked as a team, each one of us knowing there could be no peace until the final overthrow of our enemies, and every one of us doing Service for his Country to the best of his ability.

In portraying our adventures in this little book of the Squadron of which we are all so proud, I should like to thank  Sub. Lieut. Val Bennett, for giving us these water colours which he sketched and painted after each operation.  I can only regret that we are unable to reproduce them in their original attractive colouring.

The Squadron was formed at Yeovilton in Somerset in September 1943 with Lt. Cdr. (A) P. Godfrey, R.N.V.R. in command with 32 officers and 110 Ratings. Within three weeks the aircraft began to arrive.   The squadron would be the first to be equipped with the new Fairy Firefly - the Navy's new two seater reconnaissance fighter.

On the 18th May 1944, the Squadron as a whole flew out to H.M.S. Indefatigable, the Royal Navy's latest and largest carrier, commanded by Captain Q.D. Grahame, C.B.E., D.S.O.  1770 was the first Squadron to land on and carried out the operation without mishap.  The ship then proceeded from Scapa Flow to the Clyde to pick up the ship's other Squadrons and work up as an operational Carrier. During the last week of June the ship joined the Home Fleet.

(Note - Extracts from the Booklet are in quotation marks)

On the 14th of July the ship sailed from Scapa Flow in company with the aircraft carriers Formidable and Furious to attack the German Battleship Tirpitz which was lying in Alten Fjord, in northern Norway.   The strikes took place on the 17th when 1770 Squadron were in support as strafing fighters and escorts to the 44 Barracuda aircraft.  At 0204 Tirpitz received warning of the approach of a large formation of aircraft, AA crews closed up ;and within ten minutes the shore-based smoke screen was established. By 0220 as the aircraft were beginning to attack the target was almost obscured by smoke.

"I must say we did not find the operation to be a very simple affair.  Our strikes used to take the air in the midnight sun and the course to the target lay over the rugged snow capped mountains and glaciers of Norway.  An engine failure here meant little chance of survival, and must pay high tribute to all the maintenance ratings of the Squadron for the reliable way in which they serviced our aircraft, with the result that our air crews had implicit faith in their labours.  Our arrival over the target was usually greeted by a dense smoke screen and flak so thick that you could almost get out and walk on it!  The manner in which Lt. Cdr. (A) R.H. Richardson, R.N.V.R. of 1840 Squadron led his bombing Hellcats into these attacks, thereby losing his life is beyond all praise.  These operations all down the coast of Norway, lasted until the end of August, when we returned to the Clyde, disembarked at Ayr and had a spot of long awaited leave."

The next operations off the coast of Norway took place on the 3rd August 1944 in company with H.M.S. Furious and other units of the Home Fleet when strikes were carried out against targets in the Molde district (Operation Turbine).  These attacks were  followed by Operation Offspring on the 10th August when Seafires and Fireflies gave protection to Avenger aircraft strafing shore installations in the Leads of Norway.

On the 18th August Indefatigable sailed in company with the aircraft carriers Formidable,  Furious , Nabob and Trumpeter from Scapa Flow for a series of attacks on the Tirpitz under the operational codename "Goodwood".  The first two attacks were carried out on the 22nd August. The escort carrier Nabob  was torpedoed by a U-boat but managed to return to harbour. In the afternoon of the 24th August aircraft from Indefatigable, Formidable and Furious took off in the heaviest attack made by the Fleet Air Arm.  Gales and fog alternated for the next five day until 29th August when another heavy attack of sixty aircraft was launched from Formidable and Indefatigable. One Firefly ** and one Corsair were lost and the carrier force withdrew to cover convoy RA 59A briefly before returning to Scapa Flow.

"During our last ten days at Ayr we were armed with our new striking weapon, the Rocket Projectile, which later proved to be so successful.  We carried out an intensive training programme with our R/P, under the direction of our armament officer Lieut. I.H.F. Martin, and joined the "Indefatigable" once again off the Welsh Coast on 18th November.  We sailed for Colombo the next day.

The voyage through the Mediterranean became almost a sightseeing tour, as we sailed past the North African Coast along which the famous Eighth Army had fought its way from Egypt to Tunisia. We were in the Mediterranean when we had our first opportunity of demonstrating our striking power with R/P and Cannon to our Admiral, Admiral Vian, and he told me on our return to the Carrier that he had never been so frightened before in his life - could we repeat such a strike against the Japs?  We did it for him later, on numerous occasions !

Ceylon - here was a land of sunshine.  We disembarked to Puttalam on 16th December, where we practiced firing our rockets from 8 a.m. till 1 p.m. daily, and we went down to the golden sands where we spent the rest of the day sunning ourselves and bathing in the surf.  But this was only to last for two weeks.  There were many jobs to be done, so we embarked again off Colombo on 24th, and arrived in Trincomalee on Christmas Day to join the newly formed British Pacific Fleet.  How much rather we would all have been in England with our families for Christmas than this hot and humid climate, but wars leave no time for sentiment.

"The fleet sailed a few days later, and on the 2nd January we struck at the large aviation fuel distillery at Pankalan Brandon in Sumatra, which was reputed to be producing 40 per cent of Japan's aviation fuel.  It was here that the Squadron led the attack and we fired our rockets in anger for the first time.  The first Firefly "kill" in this war went to Lieutenant D. LEVITT, our senior pilot, who shot down an Oscar fighter. The attack was so successful that the force withdrew, only to reappear a few days later further to the South.  The same programme was repeated against the huge oil refineries at Palembang, with the same result, and the British Pacific Fleet finally sailed from that area on 30th January 1945, with a very satisfactory credit account.

We fuelled at Fremantle on 4th February, and it was here that we first tasted Australian hospitality, when plum puddings were sent aboard every ship at the rate of one per man.  A week later we entered the wonderful harbour of Sydney, where we found the Australians had planned a very different and most welcome type of operation from that to which we had become accustomed.  The Naval invasion of Sydney lasted for three weeks, during which time we were given leave in Australian homes, with good food, dancing, parties, swimming and visits to their magnificent Zoo.  Yes indeed, we thank you Australia for the superb time you gave us.  It was just what we needed."

Towards the end of February we bid farewell to Sydney and set sail for Manus, our advanced base in the Admiralty Isles.  In early March we reached the advanced American base at Ulithi, and those of us who had wild dreams about Pacific  Islands being inhabited by stream lined hula-hula girls waiting to serenade them soon found their hopes dispelled.  A few coral strips with palm trees and a humid heat of 100 degrees in the shade was all we saw of Pacific Islands.

The drive to Japan was on.  On the 25th March the British Navy joined in the assault by attacking, neutralising and destroying the Sakishima Islands, 450 miles south of Japan, in support of the American seaborne landing in Okinawa.  This operation lasted until the 25th May.

During operation "Iceberg" as it was termed, 1770 Squadron flew daily to strike the enemy with rockets and cannon until practically every military object on the Islands had been hit. Lieutenants THOMSON and STOTT distinguished themselves by shooting down four out of five suiciders on their way to attack the Fleet. Lieutenant TAYLOR silenced a coastal gun which enabled an Air Sea Rescue Walrus to pick up a ditched crew just off the coast.  There were innumerable other incidents which I cannot relate here, but they all go to make up the fine record that the Squadron built up while operating with the Fleet.

This is the story of our Squadron.  Credit must go to the Air Crews for the manner in which they did all that was asked of them.   Without the loyal support of the Ground Crews, we could have done nothing.  Under the supervision of C.P.O.'s BUCKEE, EVANS, and BROWN and P.O. GUNN, with such ready assistance from P.O.'s CONNEL, BATEMAN and others, they lived and worked under the most adverse, crowded conditions in a humid temperature of   little below 100 degrees F for months on end.

When Mr. CHURCHILL   broadcast, in our darkest days, he offered us little but blood, sweat and toil until the utter defeat of our enemies.  In the life of 1770 Squadron we found all these things."

"Greater love hath no man than this, that he lay down his life for his friends" 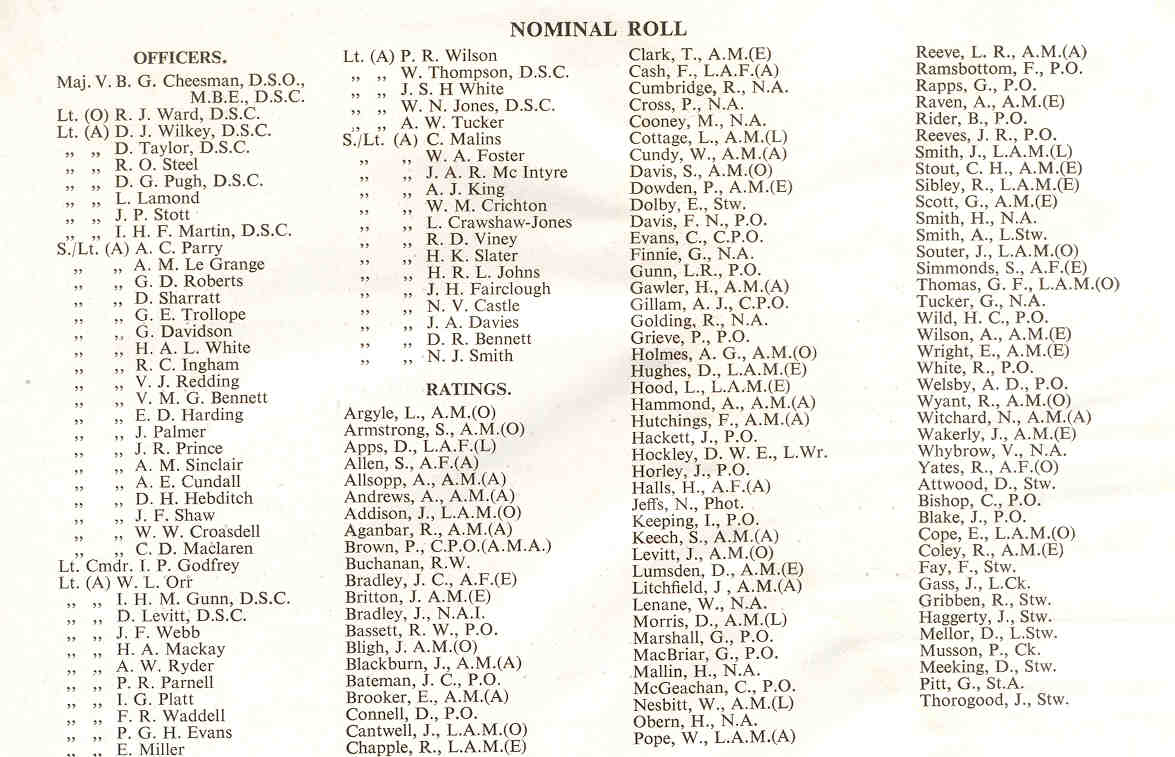