Brian devoted much of his time in his later years in order that Boys from HMS St. George who served, especially those who sacrificed their youthful lives in the Second World War,  should have a lasting Memorial at the National Memorial Arboretum, Alrewas, Staffs.
A Dedication Service followed by the Blessing of the Plot and the Planting of an Oak Tree took place on the 21st June 2001 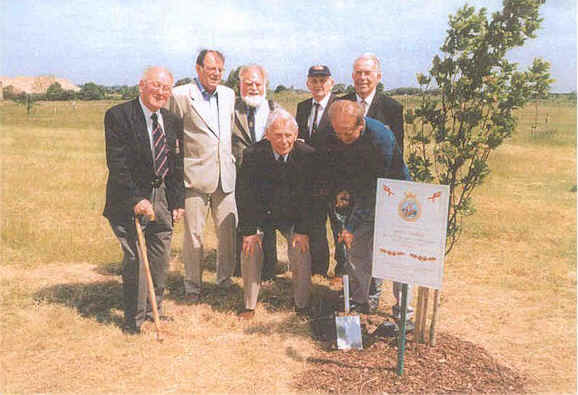 The condition of the original plaque that was dedicated with the Oak Tree in June 2001 was
such that it needed to be replaced to ensure that the ex St. George Boys that it honoured
were still remembered with pride.
A new plaque, pictured above, has been placed in position on the Oak tree.
It has been donated by ex St. George Boy William Briggs and his wife.
Another ex St. George Boy Seaman, Les Wills
has provided the photographs of the plaque and Oak tree at Alrewas and has been most helpful in other ways. 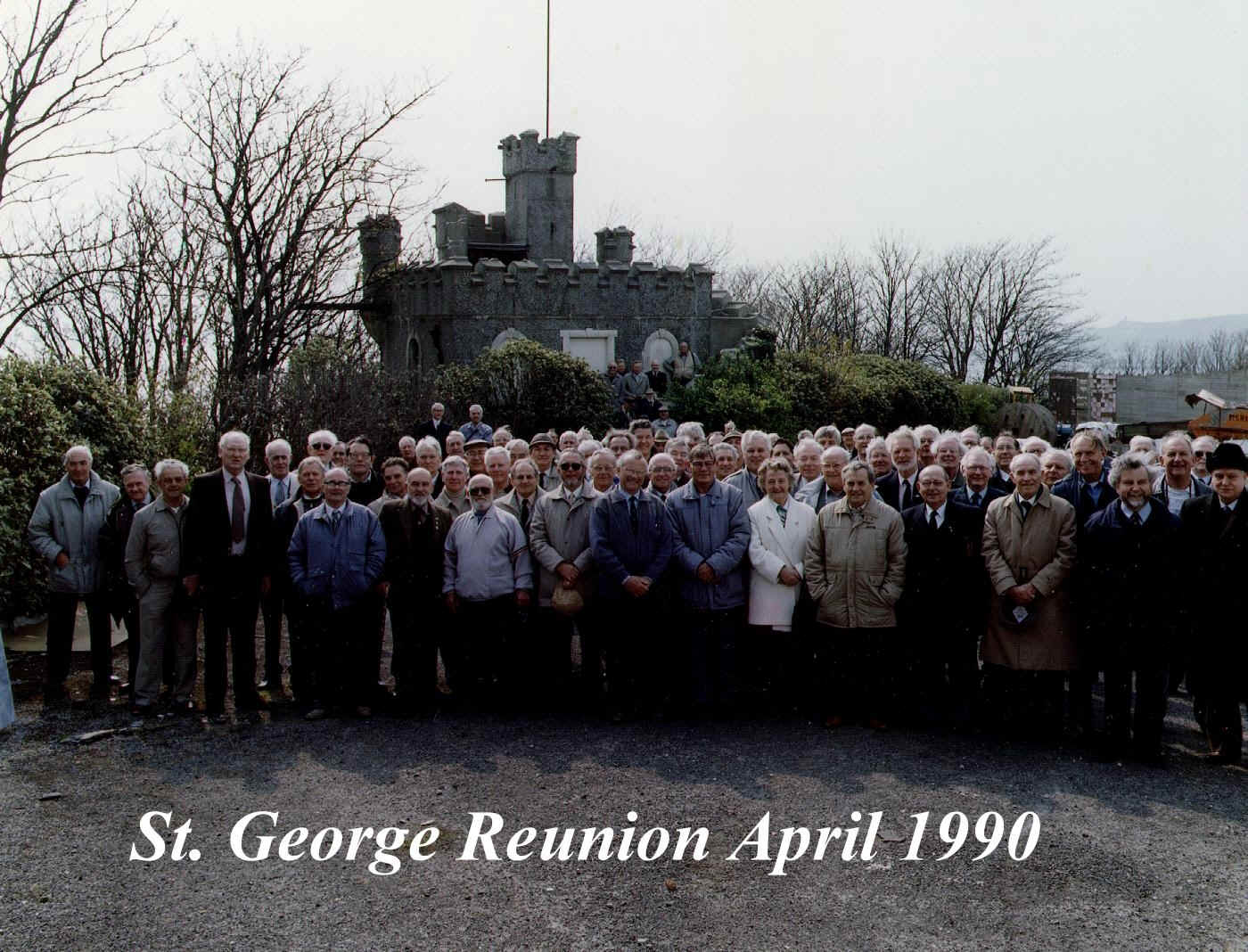 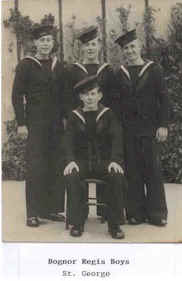 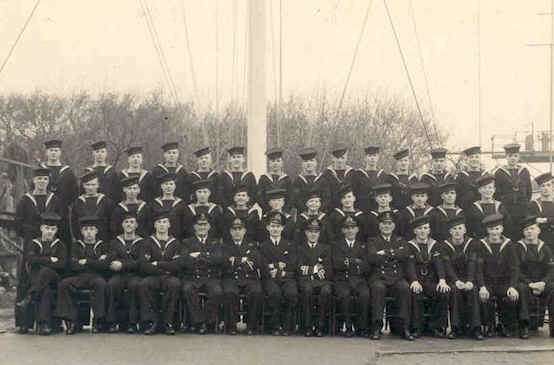 Exmouth 206
These pictures have been forwarded by  George  Wilson.
He is the son of ex St. George Boy.  George  Wilson
who was a Boy Telegraphist in Exmouth  206 Division in 1940 - 41.
George Snr later joined HMS Euryalus and served in the RN until 1954 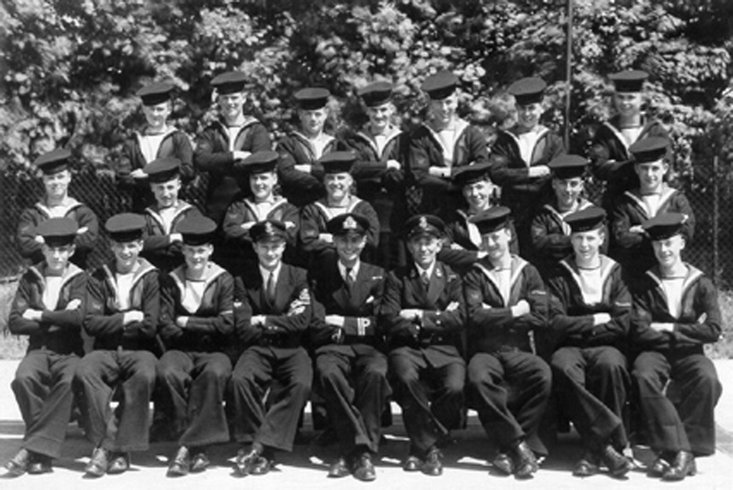 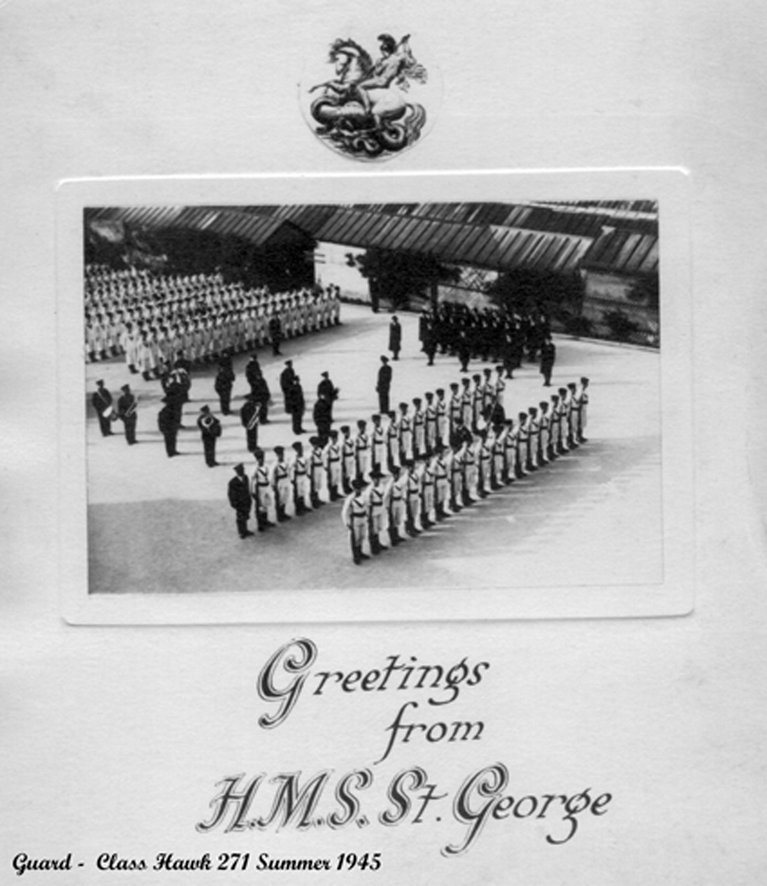 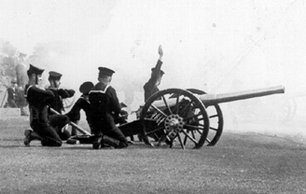 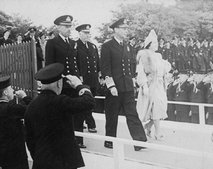 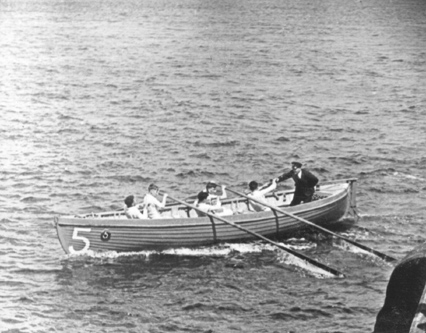 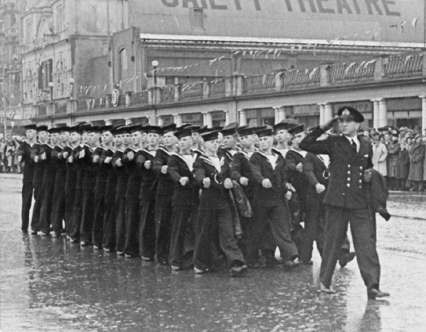 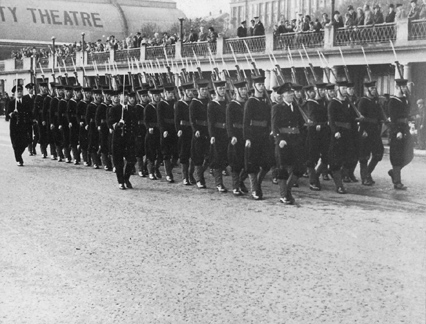 Mother was never happy that I chose to join the Royal Navy, just before she died at the age of 91 she told me that she had never wanted me to go into the service; It was too late to discus the matter further. Father however took a different view and signed the necessary papers having first pointed out to me that it was a commitment for 12 years from the age of 18.It was whilst I was farming at Burton Pidsey that my call up papers arrived.

On the 4th September 1944 I left home and travelled to the Royal Naval recruiting office in Manchester. I was 16 years and 7 months old and on my way into the Royal Navy. Together with other boys we were sent to Preston to spend that night in a barracks recently occupied by the US army and for the first and only time had to sleep in a bunk which was flee ridden. Because we has arrived late and missed dinner had both dinner and tea served on the same plate. The following morning we went to Fleetwood for the Isle of Man ferry and eventually arrived at Douglas to begin enrolment into the Royal Navy.  On arrival at HMS St. George, we were allocated beds in the chalets of the New Entry (Nozzers) lines. I was put in Rodney section and shared a cabin with three others.  We were issued with our kit and began the laborious task of sewing our name into every article using red silk and the chain stitch,the final results were to be inspected so it had to be done neatly. Medical inspections, vaccinations, identity discs and all the paraphernalia completed my induction into the Royal Navy which included making a will.

In retrospect I realise that this time was the beginning of being changed from an adolescent into manhood and whilst we were paid as boys there was no allowance made for age; we all grew and had to grow up in a matter of weeks, if not in days.Six weeks after joining St George and passing out from “Nozzers” I joined Hawk 271 class sharing a cabin for 15 months with 3 other budding telegraphists under the ever watchful eye of Petty Officer telegraphist Cotter and Lieutenant Guritz. Petty Officer Cotter was a very reluctant overseer who resented being drafted to the cushy number of training and had an earnest desire to return to real active service, in consequence he would on occasions make our lives difficult. Training was very intense and split into four parts, seamanship, telegraphy, sports and schooling which meant a 2 mile march to a school at Ballakameen usually to the beat of a drum and with Chiefs, POs, and Boy POs shouting orders and trying to prevent all the skylarking that went on. It was God help anyone who was caught! and usually the whole class who would be punished. We prided ourselves in our uniforms and went to some lengths to look “Tidily” using the mustard gas ointment in our gas masks to lighten the colour of our collars, splitting the black silks in half so that they lay flat onto the jumper and making the cap tally bow close to the HMS instead of at the side of the cap which itself was bent to give it a peaked appearance at the front. Wednesday was pay-day. We used to line up, off caps to the Paymaster who would place your weekly allowance on it. As a Boy 2nd class we received 2 shillings and as Boy 1st class 2 shillings and sixpence. Out of this money we had to buy small luxuries like toothpaste, writing material and cigarettes. There were several boys who came from South Africa and Rhodesia and were we somewhat envious that they should receive monthly parcels containing all these and other luxuries. However I also had privileges and on occasions was granted week end leave to stay with my aunt and uncle who lived in Ramsey where I had spent many pre-war holidays.

On my first leave in December 1944 my cousin Joyce left the Island for the first time and travelled home with me. It was a very rough crossing to Fleetwood when most of the passengers were sea sick; an experience which thankfully I never suffered. It was the first time that Joyce heard the air raid siren in anger; doodle bugs on there way to Sheffield and we dived into the air raid shelter when one’s engine cut . On the return journeys we had to get a train from Doncaster to Wakefield where we had to change stations and as the train to Fleetwood was many hours later and the station was shut we used to break into the station to await the Fleetwood train for the Isle of Man ferry.  Once a fortnight we were were given shore leave from 1 pm to 8 pm to meander around Douglas where we could get tea and cakes at one of the service facilities. Whist there was very little to do it was a few hours away from the Indigineous HMS St George. The captain of St George was Captain Bell ; referred to as “Dinger Bell” who was the captain of HMS Exeter at the battle of the River Plate and the subsequent scuttling of the German battle cruiser Graf Spey. Hawk 271 class.  To qualify as a telegraphist you had to receive and transmit messages at at least 30 words a minute, know how to address messages in the many formats depending upon the urgency of the massage and addressees priority, being able to code and decode the many cyphers used by the Royal Navy.  However after qualifying I was selected to be trained as a Radio Mechanic (Air) and in January 1946 sent to HMS Aerial in the village of Culcheth near Warrington, an event which was to effect my life dramatically for it was there that I met Miss Anne Jackson. 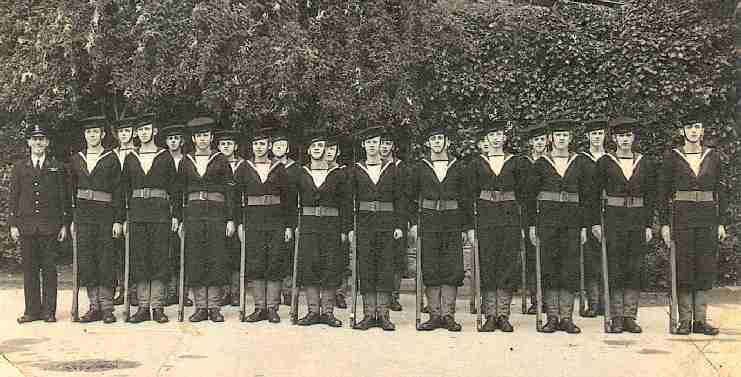 Any familiar faces or news of the Class ? contact Garth at 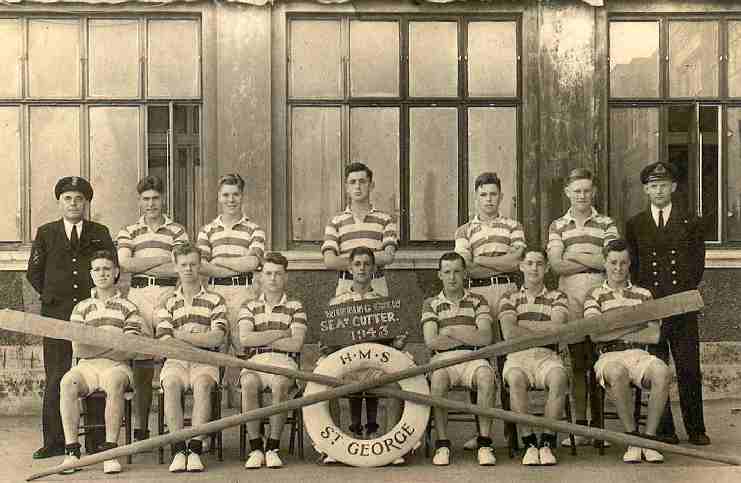 (Garth is in the back row next to PO Tom Carlton) 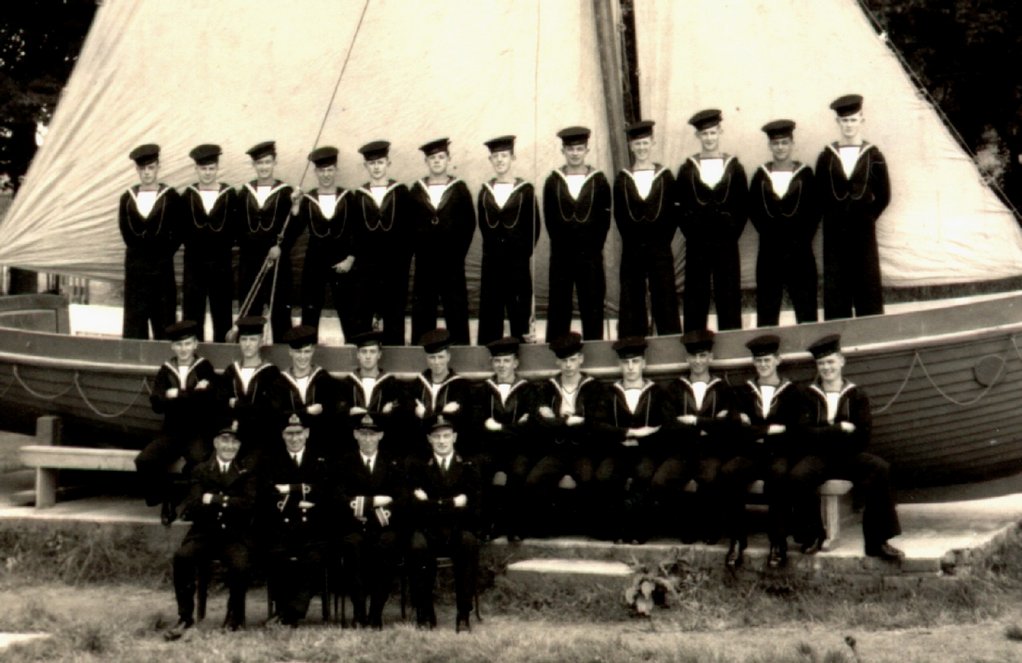 If you knew Thomas (Tom) or anyone else in the photograph please contact Tom via his son,